The Fundamentals of Deterrence

Find out why the least utilized component of the Test Security Process is vital for defending the validity of exam scores. This article provides the foundation for understanding just what deterrence is, and the positive effect it can have on test security. 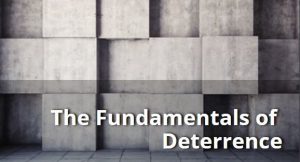 Deterrence is a relatively misunderstood and under-utilized way to handle a surprisingly large variety of test security threats. This particular article is intended to provide a foundation for understanding deterrence and its effects.

To begin with, let me illustrate the power of deterrence in a non-testing context: From the mid-1940s through the 1980s, the United States and its allies were pitted against the Soviet Union and its allies in the Cold War. During that 45-year period, the two sides continuously grew their stockpiles of nuclear weapons, each with improved range and capability for destruction. Amazingly, conflict was ultimately avoided because of the phenomenon of deterrence. Either side—or, I should more accurately state, people on either side—could have begun a war, but were discouraged from doing so by the fear of mutual annihilation. They were daunted by the outlook of living in a world following such massive destruction. In short, it could be deduced that the entire Cold War was based on people from both sides being unwilling to kick off a real war! It’s not unreasonable to consider that if deterrence as a principle worked to discourage global thermonuclear war, it could…

To read the rest of this article, click here.

You will be automatically re-directed to Caveon’s e-magazine, The Lockbox.